Read more about these challenges in my Science Robotics article here.

And yes, there’s a John Wick they-killed-my-dog scene in there too. 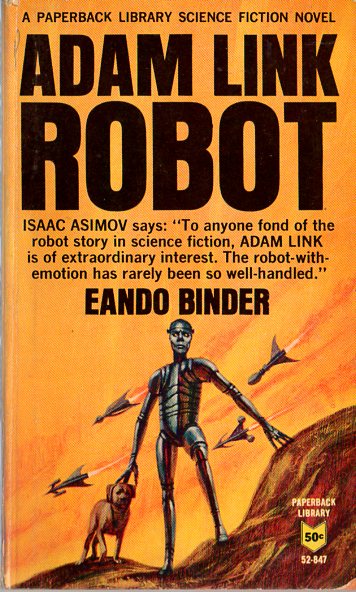 Snippet for the article with some expansion:

In 1939, Eando Binder began a short story cycle about a robot named Adam Link. The first story in Binder’s series was titled “I, Robot.” That clever phrase would be recycled by Isaac Asimov’s publisher (against Asimov’s wishes) for his famous short story cycle that started in 1940 about the Three Laws of Robotics. But the Binder series had another influence on Asimov: the stories explicitly related Adam’s poor treatment to how humans reacted to the Creature in Frankenstein. (After the police killed his dog- did I mention John Wick?- and put him in jail, Adam conveniently finds a copy of Mary Shelley’s Frankenstein and the penny drops on why everyone is so mean to him…) In response, Asimov coined the term “the Frankenstein Complex” in his stories[1], with his characters stating that Three Laws of Robotics gave humans the confidence in robots to overcome this neurosis.

Whether humans really have a Frankenstein Complex is a source of endless debate. Frederic Kaplan in a seminal paper presented the baseline assessment of the cultural differences and the role of popular media in trust of robots that everyone still uses[2]. Humanoid robotics researchers even have developed a formal measure of a user’s perception of the Frankenstein Complex.[3] So that group of HRI researchers believes the Frankenstein Complex is a real phenomena. But Binder’s Adam Link story cycle is also worth reexamining because it foresaw two additional challenges for robots and society that Asimov, and other early writers, did not: what is the appropriate form of control and can a robot own intellectual property.

You can get the Adam Link stories from the web as individual stories published in the online back issues of Amazing Stories but it is probably easier to get the story collection here. Binder did a fix-up novel where he organized the stories to form a chronology and added segue ways between stories.

[2] F. Kaplan, “Who is afraid of the humanoid? Investigating cultural differences in the acceptance of robots,” International Journal of Humanoid Robotics, 1–16 (2004)

How To End A Business Plan